Carrousel® systems have offered a reliable way to treat wastewater since the late 1970s. With over 700 installations, in the US alone, the solution has low energy usage and great reliability. Many innovations have been introduced over the last decades and Ovivo's systems easily meet the most stringent effluent criteria, including low Total Nitrogen and Phosphorus. 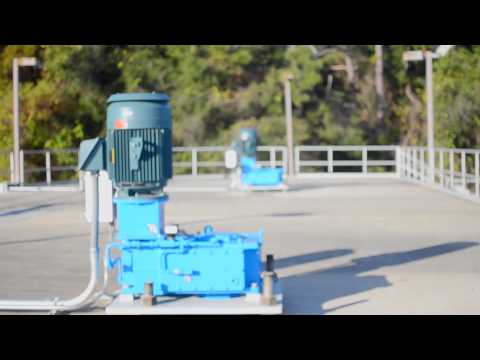 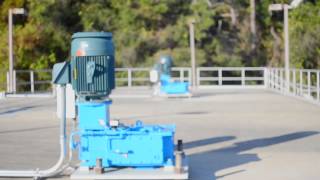 The Carrousel® system has offered a reliable way to treat wastewater since the late 1970s. With over 700 installations, many innovations have been introduced since that time

Six different flow sheets, including Bardenpho® systems, are currently available. Our most common system is the A2C™ system with free internal recycle for biochemical oxygen demand (BOD), total nitrogen (TN), and total phosphorus (TP) reduction to the lowest permit limits in the United States. Also available is the new AlternatIR™ system which reduces BOD, TN, and TP in a two-stage system, with no internal recycle pumping required. Many unique designs have also been delivered, including wrap-around clarifier construction and concentric ring plant or brush plant retrofits.

Key components of a Carrousel system are the high efficiency Excell® aerator, the nutrient-destroying EliminatIR™ gate , and the operator-friendly Oculus™ control system.

The Excell aerator with the high efficiency surface impeller and the floor-scouring lower turbine efficiently provides aeration at full speed and at 80-90% turndown (drawing 10-20% nameplate power), while still maintaining sufficient mixing in the basin. The Excell aerator offers the best energy savings and dissolved oxygen control on the market.

For the anoxic and anaerobic zones, both platform mounted mixers and submersible mixers are available.

Adding membrane digestion or the ProSet™ clarifier is a great way to minimize nutrient release from the sludge handling process.

With so many Carrousel systems out there, retrofits are a cinch to bring these older installations up to newer technology. Contact the Salt Lake City Ovivo® office or your local representative to find out more.

How do Carrousel systems protect against storm flows?

Carrousel systems have a large amount of internal mixing. Each drop of water passes through the aeration zone 100 times before it leaves over the effluent weir. This allows for a dampening effect of the organic loading. The new EliminatIR™ gate can also be used to store solids during peak events.

How can Carrousel systems treat to such low nutrient limits?

Carrousel systems have been around since the advent of nutrient removal in the United States, the late 1970s. A combination of dedicated volumes (aerobic, anoxic, and anaerobic) with unlimited and free (no pumps required) internal recycle allows for a TN of less than 3 mg/L and a TP of less than 0.3 mg/L, or even lower. Recent research has suggested that the combination of repeated floc shear in the aeration zones and the reflocculation in the long channel zones significantly enhances simultaneous nitrification/denitrification as well.

Why do Carrousel systems meet low nutrient limits so consistently?

The power turndown of the Excell aerator can reach 90%, so DO (dissolved oxygen) control even at low flows is no problem. Preventing overation is the key to good, consistent biological nutrient removal, and lack of power turndown is a reason so many other systems fail or need large amounts of chemicals to make up for this deficiency. In addition, the free internal recycle (with no pumps) from the aeration zone to the anoxic zone can reach very high values (IR/Q can be >10), allowing for large denitrification rates.

Are Carrousel systems large in volume?

Are Carrousel systems large in footprint?

Carrousel systems can be much deeper in SWD (sidewater depth) than competing systems. With draft tube aerator technology and our unique Excell aerator, designs of 23-25 feet SWD are possible. We have three such systems operating in the United States.

Why are Carrousel systems so popular?

Quite simply, Carrousel systems are the most operator-friendly system on the market that can easily meet the most stringent permit limits in the United States.

Is there a license fee required?

What configuration is needed for my plant?

In general, refer to the flow sheets available. Ovivo process engineers will develop a proposal specific to your plant.

How many Carrousel system installations are out there?

Over 700 Carrousel systems have been installed in the United States alone!